The 12th Man in Education

This post is based on remarks I made during a speech to the Rise and Shine Program at the Berkeley County Chamber of Commerce on Friday, February 7th.

Wait, keep reading. I promise it gets better. I mean, I really do hate football.  I completely understand the value of sports and exercise and teamwork, but professional football is just too commercialized and dramatized for me to find any value in it. This post-Super Bowl week has been complete bliss: no more ESPN Red Zone or heated Facebook posts on the Seahawks and Broncos. I don't watch a lot of television, but it's nice to hear and see something else when it is on besides a giant green field and fellows in shiny, mascot emblazoned helmets. And the Star Spangled Banner sung off key over and over again? Don't even get me started.

In the midst of the hype leading up to last Sunday's national holiday, I kept hearing about the number 12 regarding the Seattle Seahawks (keep in mind I really make a concerted effort to have nothing to do with professional football). 12, 12, 12. What is the big deal? Who is this 12th man, was there a story behind it? I like stories, even if they are related to sports. I finally caved and Googled it before Bruno Mars performed and made the Super Bowl worth watching (at least the half time show portion of it).

So this is what I find (thank you, Wikipedia): since there are only 11 players on the field at a time, the "12th man" is all the fans supporting the team. They aren't on the field playing the game, but they are supporting them from the sidelines. Their energy and enthusiasm, even when the score is down, gives the team motivation to keep trying. Texas A&M trademarked the phrase, although several NFL teams, such as the Seahawks, recognize "12" as their loyal fans.You probably already knew all of this, but I didn't.

Suddenly, for a brief instant, I liked football - because we need the "12th man" in education.

This year, I am not on the field playing the game in room 104B, but am getting a view of education from the stands and occasionally the box seats (State of the State...Scottsdale...White House in a few months) as I learn about the policies and people behind our classrooms and schools. I am seeing and hearing things from another perspective than I do when I am working with my teammates, as we pass the ball and go for the touchdown, all in the name of giving our students an engaging, quality learning environment. I'm learning a lot about the people in the stands, the families, the community, the lawmakers - they watch the game, sometimes up close, but often from afar. They only know what they can see and hear from their seats.

The players on the field are only human. We go for that touchdown everyday, and are often met by an interception.There are injuries, fumbles, missed field goals in the midst of every yard gained. As teachers, we are painfully aware of the set backs. We want to win. We want our students, more specifically, to win, and we are their defense. There are times we succeed, and the crowd goes wild. Everyone loves you when you are ahead. And there are times of stunning, heartbreaking defeat.

Which is why we need our 12th man. We need those who can't be on the field to support us, to lift us up, even when it's difficult and it looks like we aren't trying. Teachers are already in overtime, making special teams, learning new plays right in the middle of the game. We're playing for the future of your children. It keeps us up late at night, leads us to study better practices during the off season, and has us overextending our already exhausted mental and physical well being. We know we have the eyes and ears of the community upon us, and it sears the soul when disgust is heard in their voices or read in their comments - or when they just leave the stands because it's not worth it to them to watch anymore. The 12th man needs to cheer us on, expect us to succeed, and ask us what we need to get there. Teachers aren't the enemy; they are the home team, and the success of your children is worth hanging in there and staying involved regardless of the score at half time.

We're on to another sporting event that will take over the airwaves for the next two weeks - the Olympics. Now, even I like the Olympics. Every four years, athletes come together to compete in the games from every corner of the earth. Our teams must have the skills to compete against those from other countries, to be effective in the pursuit of their goals among a global audience. The world is watching to see who will come out on top. Sometimes we're sure that the USA is going to take home the gold, but are surprised when another country knocks us out of medal contention.

Everyday teachers are on the field in the Super Bowl of education, when we are ultimately preparing our students for the Olympics of life. This stadium, our classrooms, are just setting the stage for our students to be in the game with the rest of the world. Prized rings and endorsements aren't what we have our sights on, but knowing that we have prepared students who are motivated to learn and are on level with their peers and future colleagues around the world is more valued than any spray of confetti or glossy trophy. It's a stunning task teaching the doctors, artists, presidents, and scientists of the future, as the clock ticks down the seconds to the end of another quarter, another school year. That same enthusiasm that you see on your television 9 PM on a Monday night in October needs to be equal to the support in a child's classroom 7 PM on Open House Night in August. What will settle the final score in education won't be a number on a scoreboard or a test but how those with the greatest influence off the field choose to support it.

Teachers are the hardest working athletes you'll ever meet. Those that love the game stay in it because we believe we will succeed for the sake of your children. But if we are going to do that to the best of our ability, we must have have the 12th man behind us.

Email ThisBlogThis!Share to TwitterShare to FacebookShare to Pinterest
Labels: reflections 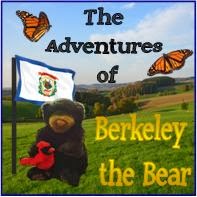 You are the Difference.

What are you reading, West Virginia?